Monitoring the Vibration during Decommission of

During the decommissioning of a section of the Brent Delta Oil Platform in Hartlepool Vibration Monitoring Services were asked to monitor the vibration levels generated around the drop zone to ascertain the impact vibration levels and frequencies.  Four Profound Vibra+ vibration monitors were used at locations around the site; areas of significance were an EDF Energy Nuclear Power Station and a Chemical plant.

The Brent Delta Platform, which was removed from the North Sea in one piece, is equivalent to the height of the London Eye and for the last 40 years has operated as a hotel for over 160 staff, a factory, and a processing plant. The deck space of the platform is almost the same size as a football pitch.

At the length of six jumbo jets, the Pioneering Spirit lifted the 24,200 tonne platform from Brent Delta in one piece. This operation took place in late April and marks the heaviest marine lift ever undertaken at sea.

The Brent Delta platform was transported to the Able UK Seaton Port yard in Hartlepool where at least 97% of the material will be recycled. It is anticipated it could take between 12-18 months to fully dismantle and recycle the platform.

The corner section of the platform was carefully cut away ready for the drop and the levels generated were minimal and did not cause excess vibration to the sensitive surrounding buildings. 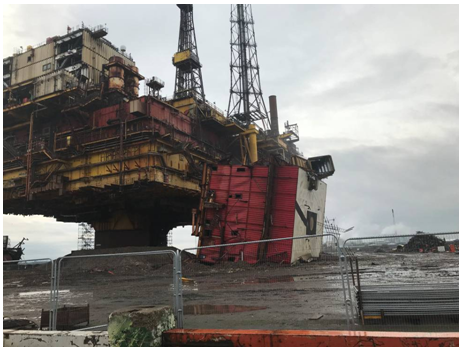 Vibration Monitoring Services recently carried out monitoring at a footbridge close to a renovated Mill & Culvert which was to be removed to allow the supports either end across the stream to be replaced.

Vibration Monitoring survey to assess the shock waves generated during the collapse of a crane at Felixstowe quay.

This site uses cookies. By continuing to browse the site you are agreeing to our use of cookies. Find out more here.Got it!